Symptoms of pine gall rust appear as round, swollen galls on the branches or trunks of susceptible pine trees. Galls may range from an inch or less in diameter to several inches across, and they are perennial, persisting for many years. Sometimes, a gall girdles a branch, causing needles to turn yellow and brown as the branch dies.

Eastern pine gall rust is sometimes called 'oak-pine rust' because the fungus that causes it spends part of its life cycle on pine and part on oak, its alternate host. On the oak, the fungus forms small hair-like projections on the undersides of leaves. Western gall rust does not have an alternate host, so it is sometimes called 'pine-pine rust' because the spores produced on pine are able to directly infect other pines.

The fungus that causes Western pine gall rust infects newly emerging shoots of susceptible trees in the spring. About a year or two after infection, the branch begins to swell to form a round gall. Galls that are about three years old or older produce yellow spores in blisters underneath the bark in the spring, and these spores travel through air currents to infect other nearby trees. There are other, more serious disease problems of Austrian and Scots pine that prevent them from being good choices for Iowa landscapes. Scots pines are still a good choice for Christmas tree plantations, though. Always carefully inspect nursery stock before purchase. However, remember that an infected plant may not show symptoms for at least a year. If galls are found on a tree in the landscape or plantation, the galled branches should be pruned out before the fungus has a chance to produce spores in the spring. In some cases, a heavily galled tree may need to be removed. The fungus will not survive once the plant is dead, so infected branches may be saved for firewood or other uses. 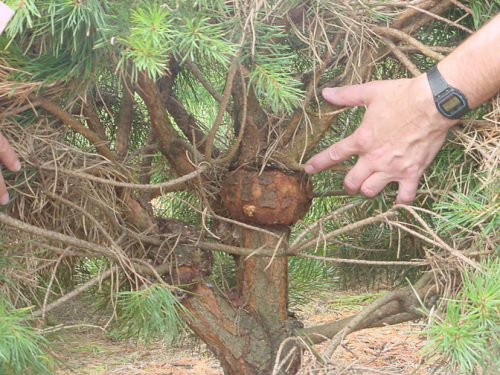 A rust gall on the main stem of a Scots pine. (Photo by Paula Flynn)

Links to this article are strongly encouraged, and this article may be republished without further permission if published as written and if credit is given to the author, Horticulture and Home Pest News, and Iowa State University Extension and Outreach. If this article is to be used in any other manner, permission from the author is required. This article was originally published on April 9, 2008. The information contained within may not be the most current and accurate depending on when it is accessed.