The Colors of Cauliflower

Cauliflower is one an underappreciated vegetable in the garden. I sometimes wonder why more people don't grow this member of the broccoli family. With the right environmental conditions, it is relatively easy to grow and stores well after harvest. Maybe people don't grow cauliflower because it prefers cool weather and we forget to plant them in April not May? Or maybe people avoid growing cauliflower because many of the older varieties had to be "blanched". Blanching means tying up the foliage to prevent light from reaching the cauliflower head - thus keeping it white. Whatever the reason, it is time to consider growing them again. Newer cauliflower cultivars are "self-blanching and do not require any additional work. Some of the newest cauliflower cultivars have heads that are brightly colored. Think green, purple, and orange! More color often translates into more nutrients so they are good for you too. And who wouldn't want to have a little purple or orange cauliflower in their vegetable tray at their next dinner party?

Like most vegetables, cauliflower prefers full sun and well drained soils. Plants can be purchased from local garden centers and are usually planted outside in early to mid April in Iowa. With our recent stretch of cold weather, most gardeners have waited to plant garden transplants outside until mid April. Seed may also be purchased and started indoors in early March for April planting. Gradually harden plants to outdoor conditions prior to planting.

Space plants approximately 18 - 24 inches apart in garden rows. Space the rows 24 - 30 inches apart. This allows the plants plenty of room to grow and mature. Keep the area weed free to allow plants to establish quickly and prevent competition for nutrients, light, and water.

Regular irrigation is often necessary since cauliflower plants have shallow root systems. About an inch of rain or water per week is sufficient. A couple of inches of organic mulch (straw, shredded newspapers, etc.) applied after planting will help control weeds and conserve moisture.

Approximately one month after planting, scatter a small amount of a complete fertilizer along one side of each row to keep plants vigorous. Plants can also be watered with a soluble fertilizer solution 2 or 3 times a few weeks after planting.

Older cultivars will need to be blanched to produce white heads. Generally when the heads are a couple of inches across, the inner leaves are loosely tied together with rubber bands, cloth strips, or twine. Newer white cultivars produce inner leaves that hug the heads tightly and prevent light penetration. Plants that are not blanched will have heads that mature creamy white or greenish. Generally within a couple of weeks of blanching, the heads are ready to harvest. The colorful cultivars don't require blanching.

While cauliflower is primarily grown as a spring crop, many of the cultivars can be planted again in the garden for a fall harvest. Seed are generally started in late July and transplants are planted outside in mid to late August. Heads are usually ready for harvest in early to mid October. While many of the colorful cauliflower cultivars are amazing to grow, they are still considered a novelty by many horticulturists and gardeners. Cauliflower, in general, is not heat tolerant. Because most of the colorful cultivars are late season producers and are more likely to be exposed to hot, dry weather, they are often less productive than the earlier white cultivars.

Early season cultivars are generally ready to harvest in about 50 days and late season cultivars are ready to harvest in 75 days. Harvestable heads are approximately 6-8 inches in diameter with a compact, smooth surface. Overmature heads look more lumpy or grainy and are sometimes called "ricey". After harvest, store heads in perforated plastic bags in the refrigerator. They generally keep well in the refrigerator for 2-3 weeks. 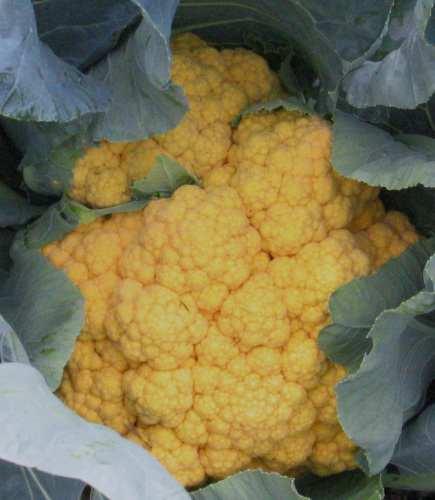 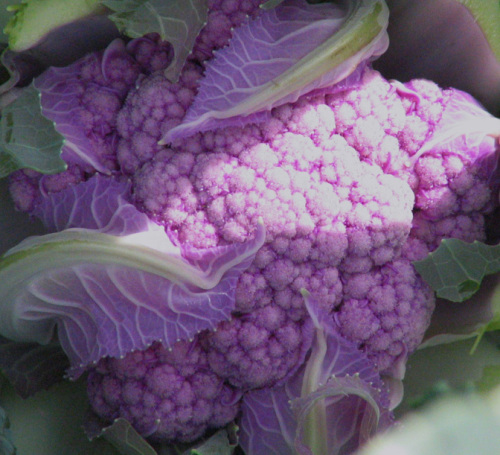 Links to this article are strongly encouraged, and this article may be republished without further permission if published as written and if credit is given to the author, Horticulture and Home Pest News, and Iowa State University Extension and Outreach. If this article is to be used in any other manner, permission from the author is required. This article was originally published on April 9, 2008. The information contained within may not be the most current and accurate depending on when it is accessed.