It's been a long, frigid winter, and I'm ready for spring. Some have asked if there might be a silver lining to this cloud of a cold winter -- could all this cold weather have killed off more plant pathogens and insects than usual, so they'll be less of a problem in the spring and summer?

Unfortunately, most fungi that attack Iowa plants are unfazed by especially cold winters. Many plant pathogenic fungi spend the winter in a dormant state, usually on old plant material or in the soil. Many fungi create special survival structures that are darkly pigmented and thick-walled to survive extended cold and dry periods. Scientists who study fungi often keep their fungal cultures in an ultracold (-80 degrees C, -112 degrees F) freezer for long-term storage, and most fungi resume growth when temperatures are more favorable.

Some plant pathogenic fungi, such as many of the rusts, never survive the winter in Iowa, and instead must be reintroduced by airborne spores every summer. A particularly severe winter in Iowa does not affect them, although a severe winter in the South where they do overwinter may decrease their levels in Iowa the following season.

Bacteria, viruses, and nematodes also seem to be largely unaffected by especially cold Iowa winters, unless they spend the winter in an insect vector.

Insects are more sensitive to cold, and may be killed over the winter if they get too cold for too long. However, most insects spend the winter in or on the ground, not out in the open, and a blanket of snow can insulate the ground and keep it sufficiently warmer than the air above it. When there is snowcover during periods of frigid temperatures (such as this winter), most insects are protected from the cold. 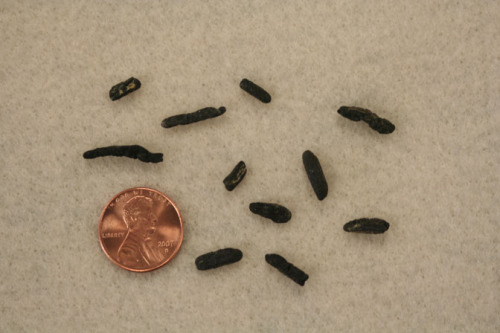 Sclerotia of the fungus that causes white mold on soybeans, tomatoes, peppers, and other plants. Sclerotia are thick-walled, darkly pigmented survival structures that can survive harsh conditions such as an Iowa winter. Photo by Christine Engelbrecht

Links to this article are strongly encouraged, and this article may be republished without further permission if published as written and if credit is given to the author, Horticulture and Home Pest News, and Iowa State University Extension and Outreach. If this article is to be used in any other manner, permission from the author is required. This article was originally published on March 12, 2008. The information contained within may not be the most current and accurate depending on when it is accessed.