Two possible new diseases of spruce have been seen in the Plant and Insect Diagnostic Clinic recently.

We have long been familiar with Rhizosphaera needle cast, a very common fungal disease that affects primarily Colorado blue spruce, and occasionally Black Hills spruce. This disease causes needles to turn purplish-brown and fall off, working from the inside of the tree out and from the bottom of the tree up. Small black fungal fruiting bodies develop in rows on infected needles, and we diagnose this disease by looking for these little black dots.

Sometimes the black fruiting bodies on symptomatic trees are not the fungus Rhizosphaera, though. Upon closer examination, diagnosticians in other states have found that sometimes the black dots are structures of a different fungus, Stigmina lautii. Under very high magnification, the Stigmina spore-producing structures appear hairy or feathery, while those of Rhizosphaera are smooth and spherical. Most magnifying glasses are not strong enough to see the difference. The spores of the two fungi also appear very different when examined under a compound microscope.

The ISU Plant and Insect Diagnostic Clinic has been carefully watching for this fungus ever since diagnosticians were first made aware of it in early 2006. In December of 2007, we confirmed the presence of Stigmina for the first time, on a Colorado blue spruce sample from Story County.

Stigmina is found on needles of trees showing symptoms very similar to those caused by Rhizosphaera needle cast (purpling and loss of older needles, working from the bottom of the tree to top). But is the Stigmina fungus really causing the problem? Several fungi closely related to S. lautii cause diseases on other plants, so it seems possible. But we don't know enough about Stigmina lautii to say if it really is a pathogen or not. Many fungi are harmless to plants but easily grow on dead or dying plant tissue. Some fungi are usually harmless, but can become harmful if the tree is especially stressed. Research into Stigmina's possible role as a pathogen is ongoing.

Another problem has been noted recently on spruce in several states, including Wisconsin, Missouri, Kansas, and Minnesota. Needles on the older growth of individual branches quickly turn yellow or brown before falling off, usually leaving behind only the newest growth. Affected branches may be scattered through the canopy. The overall canopy of the tree thins, sometimes leaving bare branches. This condition has been called "sudden needle drop" or "spruce needle drop, "sneed" for short, and has been seen on Colorado blue spruce, white spruce, and Norway spruce.

The fungus Setomelanomma holmii has been found associated with symptoms of sudden needle drop, but it has not been proven that the fungus causes the disease. The fungus forms small, black, round spore-producing structures on the stems and bud scales of affected spruce, and we can identify that it is Setomelanomma by looking at the spores under a compound microscope. A large number of other fungi produce small black structures on healthy spruce branches, so microscopic examination is necessary to tell whether Setomelanomma is present.

This January, the ISU Plant and Insect Diagnostic Clinic received samples from Black Hills spruce trees in Cerro Gordo County. The symptoms were typical of sudden needle drop, and were apparently causing eventual death of the trees. We found the Setomelanomma fungus sporulating abundantly on the branches, and we did not find evidence of any other insect or disease problems.

It is still unclear whether Setomelanomma holmii causes the condition that has been termed "sudden needle drop." It is also unclear whether other factors, such as improper planting, adverse weather, or other stresses, could directly cause the symptoms or make the trees more susceptible to the disease. Research is ongoing, but it may be years before we have clear answers.

What should we do?

If a sick spruce tree is found to have either the Stigmina fungus or the Setomelanomma fungus, is there anything we can do? Without knowing more about how the fungi live, and especially whether either fungus is actually a pathogen, it is impossible to have a confident answer to this question. If Stigmina is truly a pathogen, it would make sense that it probably infects the tree in the spring and early summer as new growth emerges, similar to when Rhizosphaera infects trees. If so, it would make sense that fungicide treatments that work for preventing Rhizosphaera needle cast (one application of a contact fungicide such as chlorothalonil or Bordeaux mixture in mid-May, and another four to six weeks later) would also help to manage "Stigmina needle cast." Fungicide applications at other times of the year are not likely to help. If Setomelanomma is really a pathogen, it would make sense that removing heavily infected branches may help minimize disease in the rest of the tree. However, there is no research or anecdotal evidence regarding management of either disease, if they truly are diseases, so this is only a guess.

In general, stress makes trees more susceptible to disease. We can minimize stress to trees by choosing an appropriate tree for the site, buying high-quality planting stock, planting it properly with proper spacing, giving it a three-inch-deep layer of mulch over the rootzone, and watering it during especially dry periods. This "preventative maintenance" is the best way to manage tree problems.

We will keep you updated as we learn more about these possible diseases. If you suspect your spruce tree may have one of these problems, please contact the Plant and Insect Diagnostic Clinic, as we are eager to learn more about where these occur in Iowa, and under what conditions. You can contact the Clinic at 515-294-0581 or sickplant@iastate.edu 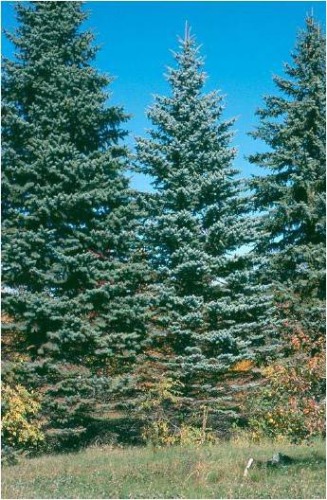 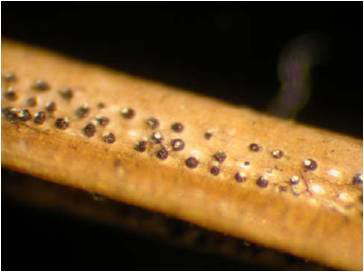 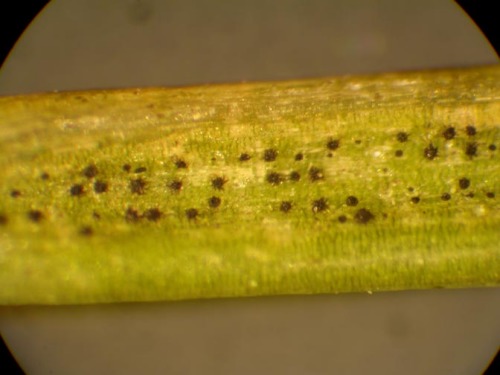 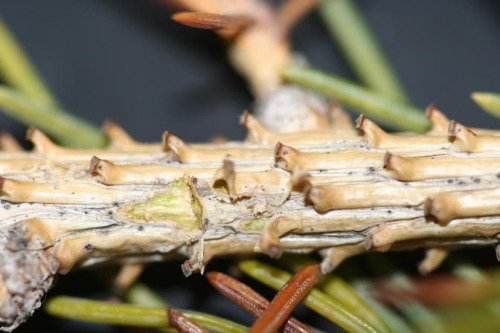 Black fruiting bodies of the fungus Setomelanomma on a spruce sample with symptoms of sudden needle drop. Photo by Christine Engelbrecht.

Links to this article are strongly encouraged, and this article may be republished without further permission if published as written and if credit is given to the author, Horticulture and Home Pest News, and Iowa State University Extension and Outreach. If this article is to be used in any other manner, permission from the author is required. This article was originally published on February 6, 2008. The information contained within may not be the most current and accurate depending on when it is accessed.