Why is that tree covered with soot?

We have received several questions this summer about trees that are covered with a black substance on their leaves and twigs. It almost looks like the leaves have been dusted with soot, and the black dust can be rubbed off with a finger. Sometimes, the black crud even drips off the tree onto plants or patio furniture underneath. What is this yucky stuff? Is it harmful to the tree?

In most cases, the problem is fungi called "sooty mold". Several species of fungi can cause sooty mold on a variety of plants, including linden, pine, and magnolia. These fungi do not actually take nutrients from the plant, though. Instead, they live off of sticky insect secretions called "honeydew," created by sucking insects such as aphids and scales. These insects suck large quantities of sap from the plant, and excrete sticky, sweet honeydew from their rear ends. When populations of the insects are high, there is sufficient honeydew to support growth of the sooty mold fungi. Excess honeydew (sometimes covered with sooty mold) can also drip onto cars, plants, and patios below the tree. Sooty mold is not directly harmful to the tree, but its presence indicates a large population of sucking insects. When there is a lot of the sooty mold, it can hinder photosynthesis of the plant, since it shades the leaves from the sun. Managing sooty mold relies on managing the population of sucking insects.

Often, these populations explode with hot, dry weather, and the onset of rain helps to bring populations down. Rain, or a strong stream of water from a hose, can help to wash off the sooty mold. Predacious insects such as ladybeetles help reduce aphid populations. In some rare cases, insecticide treatments may be warranted; but it is important to first identify what kind of insect is causing the honeydew, as recommendations differ for scales and aphids. 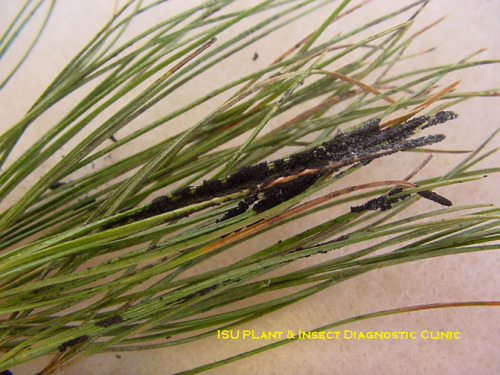 Links to this article are strongly encouraged, and this article may be republished without further permission if published as written and if credit is given to the author, Horticulture and Home Pest News, and Iowa State University Extension and Outreach. If this article is to be used in any other manner, permission from the author is required. This article was originally published on September 12, 2007. The information contained within may not be the most current and accurate depending on when it is accessed.