For the past few years, we have received many reports of bur oaks in Iowa turning brown and losing leaves starting in July. This year has been the worst year so far for this problem, with extensive browning noticed in many trees.

What are the symptoms? Leaves often turn brown along the veins and in vein-delimited V-shaped areas. Small brown spots are often visible on the leaves. As the leaves turn completely brown, they fall off. The disease tends to affect the entire tree, working from the bottom of the tree up, and it is common to see completely affected trees growing adjacent to completely healthy trees. We have only noticed the symptoms on bur oaks, not white or red oaks. Symptoms tend to first appear in July and progress through the rest of the summer. Anecdotal evidence suggests that the same trees are affected year after year.

How widespread is this problem? The DNR performs annual aerial flights to assess the health of trees in Iowa. On August 2 and 3 Aron Flickinger of the DNR flew over the Des Moines River, Cedar River, Iowa River and Mississippi River valleys. Browning of bur oak trees was documented as occurring more often than any other insect or disease problem on trees in Iowa. Muscatine and Van Buren Counties had the most trees with this symptom visible from the aerial flights. Ground surveys taken after the flights confirmed that the browning seen in the flights was on bur oaks, with symptoms consistent with our other observations.

The ISU Plant and Insect Diagnostic Clinic has received numerous samples and reports of this problem, especially from the Spirit Lake area, the Council Bluffs area, and central Iowa. DNR foresters report the disease throughout western and southern Iowa. A similar disease has been reported in the last several years in Minnesota and Wisconsin.

What is causing the disease? In other states, the disease has been called "Tubakia leaf spot", and we can consistently find the Tubakia fungus on symptomatic leaves. However, there is disagreement as to whether this fungus, usually known to cause a minor leaf spot disease on red oaks, is actually the cause of the problem, and experiments to prove whether the Tubakia fungus can produce these symptoms on bur oak have never been done. We have tested many symptomatic trees for oak wilt, with negative results. Symptomatic leaves have been tested for a disease called bacterial leaf scorch, again with negative results. The fungi that cause anthracnose, a common springtime disease that causes browning, have not been found on these leaves. It is likely that environmental conditions, such as hot dry weather, promote the disease.

Many other factors can also cause browning of oak trees in late summer. Large lace bug populations have caused leaf discoloration on many trees in Iowa recently. Stresses such as drought, soil compaction such as from nearby construction, poor site conditions, injuries to the trunk or roots, etc, may also cause browning and decline of oak trees, even without this leaf disease. The fungal disease oak wilt has been found on bur oaks, and is another factor that can cause browning.

How will this disease affect oaks? Foresters are concerned about how this leaf disease will affect the health of Iowa's oak trees. If the premature defoliation causes a new flush of leaves to open at the end of July or August, using stored energy reserves that would normally be saved for next spring, these trees will have less stored reserves for next spring's leaves. If the same tree continues to be infected several years in a row and it responds by sending out new leaves each year, the tree can eventually run out of stored reserves and die. Trees that have been observed for the past few years in Des Moines have showed progressive decline and death. However, if the trees do not respond by opening dormant buds, then this leaf disease is just an aesthetic problem having little effect on the overall health of the tree. Luckily, recent weather has provided statewide rains to replenish the dry soil conditions that our trees have been experiencing throughout June and July.

What should I do for my oak tree? At this time, we do not know for sure how much this disease will affect the overall health of the tree, nor do we know if expensive treatments such as fungicide sprays or injections would be effective. Minimizing other stresses to the tree can help to maximize its health. You can help minimize stress by watering the tree deeply but infrequently during very dry weather, avoid wounding the trunk or roots, and apply mulch over the rootzone to help moderate soil moisture and temperature levels.

What is being done to understand this disease? The DNR is establishing permanent plots across the state to see if the same bur oaks are infected each year. Trees will be monitored for new flushes of leaves in July and August, as well as overall health and decline. After several years of data we will know more about how this leaf disease is affecting the health of Iowa's oak trees.

The ISU Plant and Insect Diagnostic Clinic plans to perform laboratory inoculation experiments to determine whether the symptoms are caused by the Tubakia fungus. Testing of samples for oak wilt, bacterial leaf scorch, and other possible causes is ongoing. Iowa State University, the Iowa DNR, and the US Forest Service are continuing to collaborate in monitoring the disease. 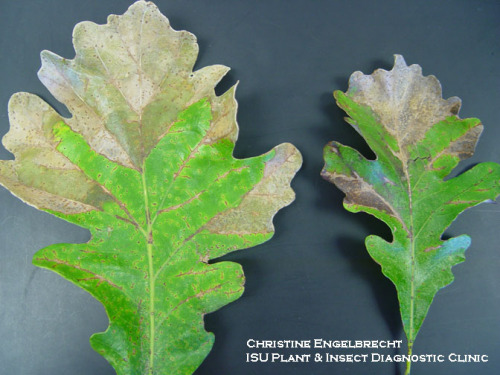 Browning of veins and V-shaped areas on bur oak leaves, typical of this disease. 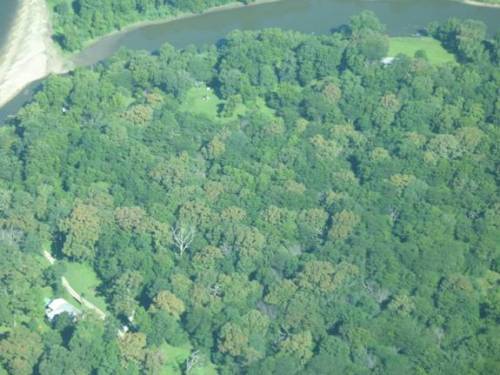 Links to this article are strongly encouraged, and this article may be republished without further permission if published as written and if credit is given to the author, Horticulture and Home Pest News, and Iowa State University Extension and Outreach. If this article is to be used in any other manner, permission from the author is required. This article was originally published on August 22, 2007. The information contained within may not be the most current and accurate depending on when it is accessed.