Several samples have come into the Plant Disease Clinic lately, showing symptoms and signs typical of Rhizosphaera needle cast. This disease is caused by the fungus Rhizosphaera kalkhoffii and is most common on Blue spruce; however, Black Hills spruce is also susceptible.

Symptoms associated with Rhizosphaera needle cast can occur on any age of tree and usually progress from lower to upper branches typically on trees that are stressed. This disease generally causes second-year needles to turn a purplish-brown and fall from the tree. Once a spruce is infected with the Rhizosphaera fungus, it usually takes up to 15 months for needle loss to occur. Repeated needle loss can result in branch death after 3 to 4 years and eventually tree death.

Several methods are recommended to help prevent infection. When planting new trees, examine needles for fruiting bodies and only plant disease free plants. If infected trees are present, do not plant healthy susceptible species next to them. In addition, provide adequate spacing when planting new trees to promote good air circulation. One important way to reduce tree stress is by mulching and watering when needed. Finally, do not trim tree branches during wet conditions because this encourages fungal spread.

Rhizosphaera needle cast can also be managed with two fungicide sprays in the spring, one applied in the last two weeks of May and the other four to six weeks later. Fungicides effective against this disease include Bordeaux mixture, other copper fungicides, Daconil, Terranil, Manicure, and Twosome. 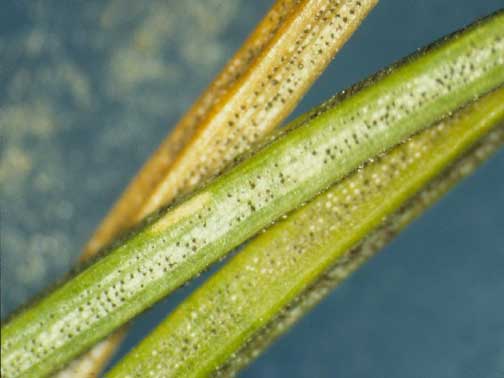 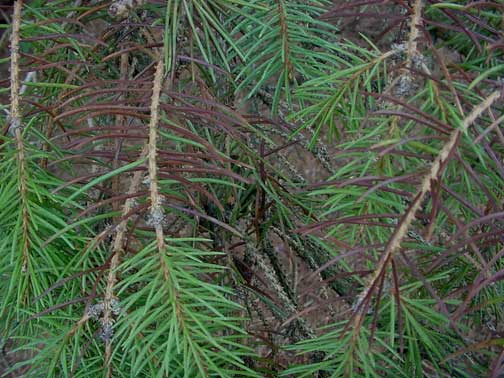 Needles infected with Rhizosphaera needle cast turn a purplish-brown and will eventually fall from the tree. 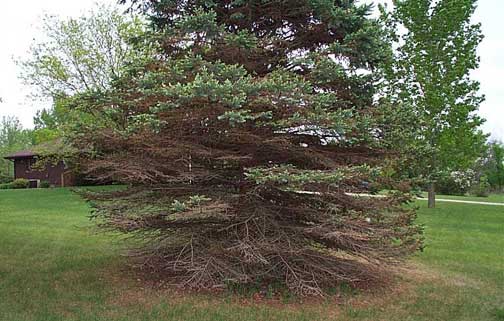 Links to this article are strongly encouraged, and this article may be republished without further permission if published as written and if credit is given to the author, Horticulture and Home Pest News, and Iowa State University Extension and Outreach. If this article is to be used in any other manner, permission from the author is required. This article was originally published on May 9, 2007. The information contained within may not be the most current and accurate depending on when it is accessed.