We occasionally receive spruce samples in the Plant Disease Clinic that show yellowing of the needles, sometimes only older needles and sometimes both older and younger needles. Such symptoms are rarely a result of infectious disease.

Yellowing of spruce may be caused by a variety of noninfectious stresses, particularly problems with the roots. Such stresses include problems with the site, such as too wet or too dry a site, or excessively compacted soil. Problems with planting are also a common culprit. Such problems can include being planted too deep, which can lead to development of coiled girdling roots around the trunk, or being planted with synthetic burlap or wire intact over the roots or stem, restricting free growth. Injuries to the trunk or roots can also cause these symptoms. Unfortunately, there is little that can be done to alleviate problems from poor planting or a poor site. Applying fungicides, insecticides, or fertilizer is unlikely to help the situation. These problems emphasize the importance of starting with an appropriate site for a tree, and planting the tree properly.

An overall yellow appearance on spruce may also be caused by spider mites. Such damage typically appears as yellow speckles on the needles when viewed under magnification. For more information on spider mites on conifers, see this article. 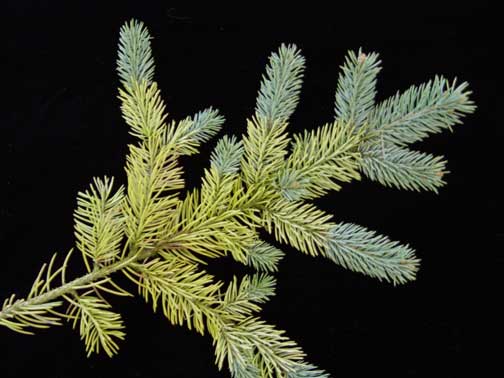 Yellow needles on a spruce sample.

Links to this article are strongly encouraged, and this article may be republished without further permission if published as written and if credit is given to the author, Horticulture and Home Pest News, and Iowa State University Extension and Outreach. If this article is to be used in any other manner, permission from the author is required. This article was originally published on April 4, 2007. The information contained within may not be the most current and accurate depending on when it is accessed.