Symptoms of snow molds first appear when snow melts in late winter or early spring. Circular, straw-colored patches appear in the lawn as the snow recedes. Patches caused by gray snow mold may be a few inches to a few feet in diameter, while those caused by pink snow mold tend to be smaller, less than six inches across. These patches may continue to enlarge if the grass remains cool and wet. Grass in the patch may be matted and wet, with pink or gray colored fungal growth over the patch or on the edge. Gray snow mold causes small, pinhead-sized round structures (sclerotia) to develop on the leaves and crowns of the grass plants.

Damage caused by snow mold usually is not serious, and affected areas typically green up eventually, though more slowly than the rest of the lawn. Raking the affected areas gently can help to dry them out and prevent further fungal growth. In some cases, affected areas will need to be overseeded if they fail to recover.

Problems with snow mold can be minimized in the future by: 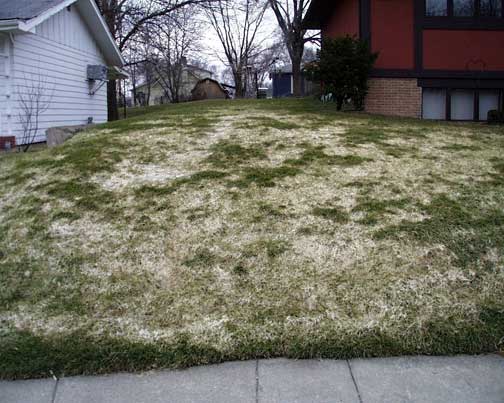 Links to this article are strongly encouraged, and this article may be republished without further permission if published as written and if credit is given to the author, Horticulture and Home Pest News, and Iowa State University Extension and Outreach. If this article is to be used in any other manner, permission from the author is required. This article was originally published on March 7, 2007. The information contained within may not be the most current and accurate depending on when it is accessed.