An occasional sight in late summer, especially in southern Iowa, is the accumulation of small broken twigs on the ground under oak, hickory and other shade, nut and fruit trees. The foliage at the ends of twigs turns brown prematurely before the twigs fall to the ground. The dropped twigs that look like they were neatly cut from the tree as with a pruning shear are the work of the twig girdler, Oncideres cingulata.

Damage by the twig girdler is occasionally conspicuous. Heavily damaged trees may appear ragged and young trees can become deformed. However, for otherwise healthy, well-established trees damage is not severe and the greatest concern is the annoyance of cleaning up the dropped twigs.

The twig girdler is a long-horned beetle (Cerambycidae) about three-fourths of an inch long, stout, grayish-brown with a lighter colored band across its wings. The antennae are as long as the body.

Adult beetles typically begin to emerge in mid-August and continue through early October. The adult female chews a neat, V-shaped groove around and partly through the small twig. This leaves the twig attached to the tree by a thin center core of wood. The beetle then deposits an egg in the bark of the twig section beyond the cut. The portion of the twig beyond the cut dies quickly and falls to the ground because of wind or its own weight.

Large numbers of girdled twigs may accumulate beneath the tree each day during this period. The egg within each fallen twig hatches into a tiny larva that bores into the dead twig to feed. The small larva stays inside the fallen twig through the winter and resumes feeding and consumes most of the wood the following spring. New adult beetles emerge late the following summer and early fall. There is only generation a year.

Collect and destroy dropped twigs and branches as they appear on the ground. Sanitation is of limited value for trees growing adjacent to woodland where girdlers may be abundant.

Spraying insecticides is not effective for control of twig girdlers in the home landscape. Commercial nut growers may apply insecticides if damage is severe. Two to three thorough applications may be needed at two-week intervals beginning in August if monitoring determines the beetles are present. 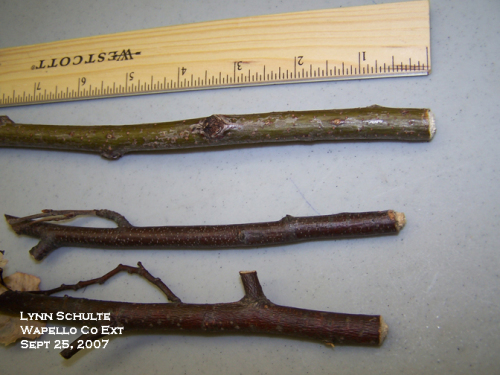 Links to this article are strongly encouraged, and this article may be republished without further permission if published as written and if credit is given to the author, Horticulture and Home Pest News, and Iowa State University Extension and Outreach. If this article is to be used in any other manner, permission from the author is required. This article was originally published on October 10, 2007. The information contained within may not be the most current and accurate depending on when it is accessed.