The cool, wet weather of May has led to an abundance of peach leaf curl, a fungal disease of peach trees. Affected peach leaves develop severe puckering and distortion, starting out green but sometimes turning red or purple. As the disease progresses, the fungus produces a thin layer of spores on the surface of the leaf, making it appear slightly gray. Infected leaves often turn yellow or brown and fall from the tree. Fruit production may be reduced, but the fungus typically does not infect the fruits themselves.

The fungus that causes peach leaf curl, Taphrina deformans, only has one life cycle per year, so spores produced on the leaves do not infect healthy leaves in the same season. The fungus survives the winter as spores on the bark and buds of the tree.

Once symptoms appear, it is too late to control the disease this season. However, because the fungus survives on the bark and buds, one application of fungicide during the dormant season can effectively manage this disease for the following growing season. Bordeaux mixture, liquid lime sulfur, chlorothalonil (Daconil and others), and copper hydroxide are labeled for control of peach leaf curl. Fungicide can be applied in the fall after leaves fall or in the spring before buds swell. If a tree is significantly defoliated by peach leaf curl in the spring, the fruits should be thinned to minimize stress to the tree. 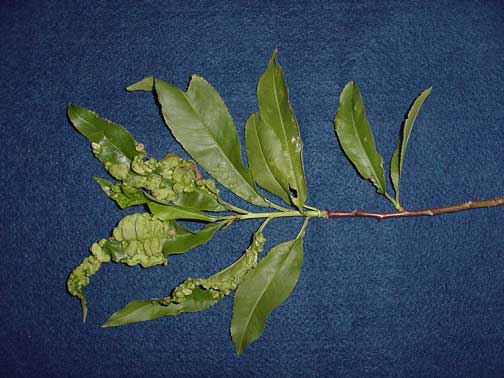 Links to this article are strongly encouraged, and this article may be republished without further permission if published as written and if credit is given to the author, Horticulture and Home Pest News, and Iowa State University Extension and Outreach. If this article is to be used in any other manner, permission from the author is required. This article was originally published on June 7, 2006. The information contained within may not be the most current and accurate depending on when it is accessed.