Duane Gissel, Scott County horticulture program assistant informed us this week that he has received his first call of the season about Japanese beetle. If the trend of the past few years persists, this will be the first call of many.

The Japanese beetle is considered the worst pest of turfgrass and landscapes in the United States because they attack so many different types of plants. The adult beetles eat the foliage, fruits and flowers of over 300 different plants. Foliage is consumed by eating the tissue between the veins, a type of feeding called skeletonizing. Flowers and fruits are devoured completely, often by a horde of a dozen or more beetles at a time. The larvae are white grubs in the soil from August until June where they feed on plant roots (especially turfgrass) and organic matter.

Adult beetles are about 3/8 inch long and 1/4 inch wide. The head and thorax are shiny metallic green, and the wing covers are coppery red. The row of five tufts of white hairs on each side of the abdomen is a distinguishing feature.

Control of adult beetles is difficult because they emerge every day for a period of several weeks. Handpicking or screening or high-value plants may be of benefit in isolated situations with limited numbers of beetles. Spot spraying infested foliage of high value plants with carbaryl (Sevin), permethrin (Eight) or cyfluthrin (Tempo) may reduce damage for several days, but multiple applications are required to maintain control. Spraying the adult stage is not an effective strategy for prevention of white grubs.

Several traps using a floral lure and sex attractant are available. Use of these traps is not recommended. Research conducted in Kentucky suggests that they are not effective in controlling moderate to heavy infestations; and they may attract more beetles into a yard than would occur otherwise. The traps may reduce damage and populations when landscapes are isolated from other Japanese beetle breeding areas or when mass trapping (everyone in the neighborhood) is used.

Japanese beetle has been reported from 19 different counties in Iowa since 1994, predominantly in the east-central region of the state. Please let us know if you find JB in a county where they have not already been reported: Black Hawk, Boone, Clayton, Clinton, Dallas, Dubuque, Floyd, Jackson, Johnson, Lee, Linn, Madison, Marshall, Muscatine, Page, Polk, Scott, Story, Woodbury. 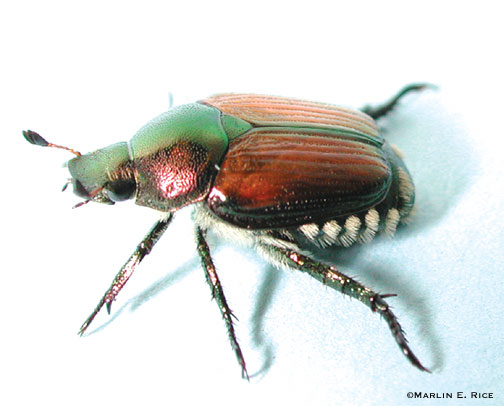 Links to this article are strongly encouraged, and this article may be republished without further permission if published as written and if credit is given to the author, Horticulture and Home Pest News, and Iowa State University Extension and Outreach. If this article is to be used in any other manner, permission from the author is required. This article was originally published on June 21, 2006. The information contained within may not be the most current and accurate depending on when it is accessed.