Pachysandra is a common groundcover plant. The most common disease affecting this plant is Volutella blight (sometimes called leaf blight and stem canker), caused by the fungus Volutella pachysandrae.

Volutella blight usually first becomes visible as wilting or dead patches in the pachysandra bed. Individual plants develop irregular tan to brown lesions on the leaves, often with concentric rings, which eventually grow and coalesce until the entire leaf dies. Brown or black cankers develop and girdle the stems, causing the plants to wilt and die. During humid weather in late spring and summer, small pinkish spore-producing structures of the fungus appear in the stem cankers and on the undersides of leaf lesions.

Stresses such as insect infestation, winter injury, excessive sun exposure, drought, or recent trimming make pachysandra more susceptible to Volutella blight, so minimizing plant stress is the first step in managing this disease. Sanitation is another important management tactic, so plants affected by Volutella blight should be removed. Disease is encouraged by moist, humid conditions, so practices that reduce leaf wetness and humidity can help to manage Volutella blight. Occasional thinning of the bed, watering in the morning rather than the evening, and avoiding heavy mulch can help. Several fungicides may be used for Volutella blight management preventatively, including thiophanate methyl, chlorothalonil, and mancozeb. Plants should be sprayed first when new foliage emerges in the spring, and repeated following label directions. 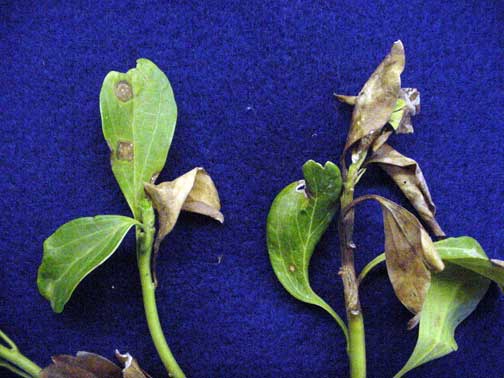 Links to this article are strongly encouraged, and this article may be republished without further permission if published as written and if credit is given to the author, Horticulture and Home Pest News, and Iowa State University Extension and Outreach. If this article is to be used in any other manner, permission from the author is required. This article was originally published on May 3, 2006. The information contained within may not be the most current and accurate depending on when it is accessed.