We received a call in the Plant Disease Clinic this week from a distressed homeowner. "Help! Aliens have landed in my yard and left orange, slimy blobs in my juniper tree! They are one to two inches in diameter, dark orange with long, slimy tentacles. What are they?"

Rather than evidence of alien invasion, the blobs this caller described were evidence of a fungal invasion. Galls formed by cedar-apple and cedar-hawthorn rust fungi have recently appeared on Eastern red cedar trees and other junipers. Two closely related species of fungi cause these diseases. These fungi require two plant hosts to complete their life cycle, so they spend part of their life cycle on cedar (juniper) and part on either apple (or crabapple) or hawthorn.

On the branches of the cedar host, the fungi produce spherical, brown galls, 1/2 inch to 2 inches in diameter. These galls are not very noticeable until wet weather occurs in the spring, when they produce orange gelatinous "horns", turning the galls into slimy, spiky balls. Spores produced in the slime travel by wind to infect the apple or hawthorn host.

The fungus infects the apple or hawthorn plant in the spring, producing bright orange spots on the tops of leaves, hence the name "rust". The spots enlarge, and by the end of the summer the underside of each spot contains long, spiny eruptions from which spores are produced. Spores from these eruptions do not re-infect the apple or hawthorn, but rather infect the cedar host, completing the life cycle.

Since two hosts are required to complete the life cycle of these fungi, the diseases they cause could theoretically be prevented by keeping the two hosts very far apart. This is not usually feasible, though, as the hosts must be more than a mile apart to prevent disease.

Easier ways to minimize disease include planting rust-resistant varieties of trees. The most susceptible apple varieties are Beacon, Jonathon, Lakeland, and Wealthy, while resistant apples include Delicious, Liberty, and McIntosh. Fungicide sprays can be used to control the disease on apples, but fungicides available to the homeowner are limited. Funginex and Immunox are labeled for control of rust on apple. Additional products, including Daconil 2787 and Cleary's 3336, are available for control of rust on crabapples. Fungicide use is not warranted on the cedar hosts. If only a few small cedars are affected, the galls can be picked off by hand. 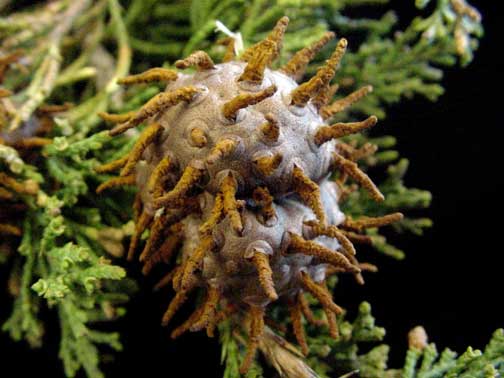 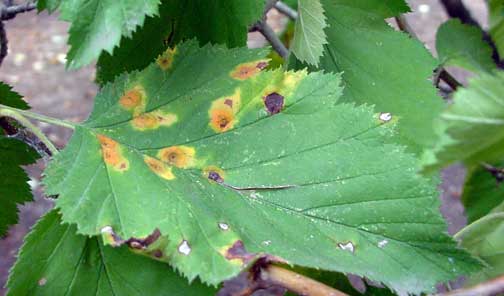 Cedar-hawthorn rust on hawthorn, showing orange spots on the top of a leaf. 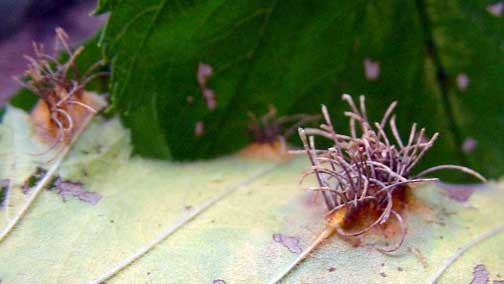 Links to this article are strongly encouraged, and this article may be republished without further permission if published as written and if credit is given to the author, Horticulture and Home Pest News, and Iowa State University Extension and Outreach. If this article is to be used in any other manner, permission from the author is required. This article was originally published on May 10, 2006. The information contained within may not be the most current and accurate depending on when it is accessed.