The Plant Disease Clinic recently received a geranium sample with brown, corky lesions on the undersides of the leaves. These lesions were not caused by an infectious disease or insect, but rather were the result of a physiological condition called edema (sometimes spelled oedema).

Edema can occur on many types of plants, but is especially common on ivy geraniums, begonias, jade plants, pansies, and violets. Affected leaves and stems at first develop tiny, 1-2 mm blisters, especially on the undersides of leaves. Many blisters may form close together, appearing as large lesions. The blisters rupture and turn tan or brown and corky. Sometimes affected leaves turn yellow and fall off the plant.

Edema tends to occur when plants take up more water through the roots than they can use or release through their leaves. This usually happens when the soil is warm and very moist, while the air is cool and humid, as often occurs on overcast days. High light intensity has also been found associated with edema in ivy geraniums.

Although edema does not significantly harm the plant, it is unsightly. Minimize problems with edema by avoiding over watering during humid, overcast weather, and reducing humidity in a greenhouse. Some varieties of plants are more prone to develop edema than others. 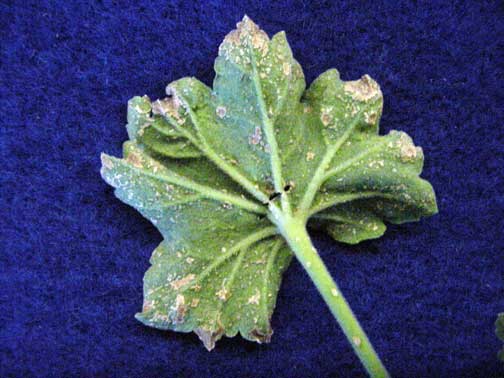 Links to this article are strongly encouraged, and this article may be republished without further permission if published as written and if credit is given to the author, Horticulture and Home Pest News, and Iowa State University Extension and Outreach. If this article is to be used in any other manner, permission from the author is required. This article was originally published on April 12, 2006. The information contained within may not be the most current and accurate depending on when it is accessed.