The Plant Disease Clinic has recently received several samples of white pines and other conifers that are turning brown. Many factors may cause browning of conifer needles.

The most common cause of brown needles is winter browning. Evergreen trees continue to produce energy from sunlight (photosynthesize) throughout the winter, which requires water. If these trees do not have sufficient stores of water from the fall to last through the winter, they may dry out and their needles turn brown. Frequent freeze/thaw cycles, cold temperatures, and rapid temperature changes increase the rate of drying. This browning may appear more pronounced on the sunny (south and west) sides of the tree. Winter browning typically becomes visible in late winter or early spring.

It is often recommended that trees be watered intensely once in the fall, right before the ground freezes, to prevent winter browning. Studies have shown that this one watering late in the fall is insufficient to protect trees from winter browning. Trees need the extra water during the dry period of late summer and early fall to prevent drought stress and ensure that they have sufficient water stores to last the winter. Preventing drought stress in late summer is more effective at minimizing winter browning than one watering in the late fall. Brown branches on affected trees should not be pruned off, as they may still have viable buds.

Evergreens near roads may also turn brown in the winter due to exposure to road salts. Some infectious diseases also cause browning of needles. These symptoms usually appear in the spring or summer, although some people do not notice them until winter. Common needle diseases of evergreens include Rhizosphaera needle cast of spruce, Dothistroma needle blight of Austrian pine, and Diplodia tip blight of Austrian and Scots pine. 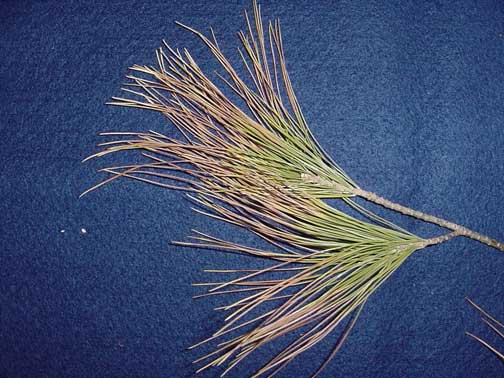 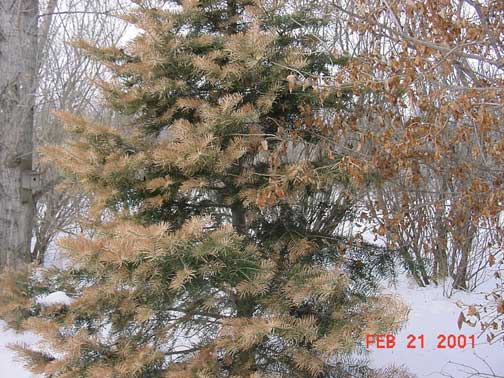 Links to this article are strongly encouraged, and this article may be republished without further permission if published as written and if credit is given to the author, Horticulture and Home Pest News, and Iowa State University Extension and Outreach. If this article is to be used in any other manner, permission from the author is required. This article was originally published on March 8, 2006. The information contained within may not be the most current and accurate depending on when it is accessed.