Dothistroma needle blight is a common fungal disease that causes browning of needles of Austrian, ponderosa, and mugo pines. Affected needles have reddish brown spots or bands. The needle tips beyond the bands dry out and turn brown a couple weeks after the bands appear, while the bases remain green. Diseased needles may drop prematurely, several months after they are infected. Typically, the most severely affected branches are towards the bottom of the tree. An entire tree may progressively lose its needles, decline, and die over the course of a few years.

Dothistroma needle blight is caused by the fungus Dothistroma pini (also called Mycosphaerella pini). The fungus is active throughout the growing season and can infect any age of needle during wet weather. However, symptoms typically first appear in early fall, although they may not be noticed immediately.

The best way to avoid Dothistroma needle blight in Iowa is to avoid planting Austrian pine. Austrian pines are very susceptible to both this disease and another disease, Diplodia tip blight, such that they are not a good choice for this area. Where Austrian pines are already planted, Dothistroma needle blight can be prevented by keeping trees in good vigor through watering and mulching, and promoting air circulation through appropriate pruning, adequate spacing, and weeding.

Fungicide sprays may be used if symptoms are found. Sprays should be applied twice in the spring after new growth appears, once in mid-May and again 4 to 6 weeks later. Effective sprays include Bordeaux mixture, copper fungicides, and EBDCs. Spraying may be discontinued when symptoms are no longer found. 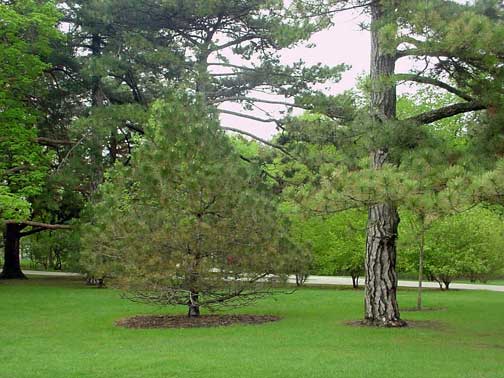 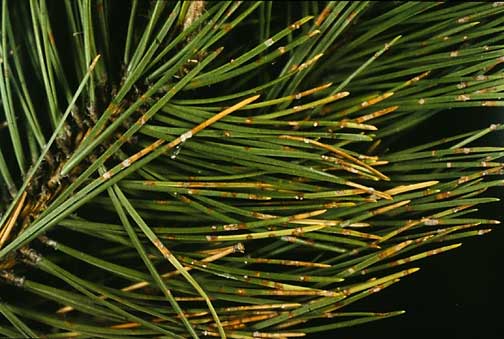 Links to this article are strongly encouraged, and this article may be republished without further permission if published as written and if credit is given to the author, Horticulture and Home Pest News, and Iowa State University Extension and Outreach. If this article is to be used in any other manner, permission from the author is required. This article was originally published on February 8, 2006. The information contained within may not be the most current and accurate depending on when it is accessed.