Pine wilt is a common disease that causes browning and death of pines, especially Scots pines. Austrian, mugo, red, jack, and white pine may also be affected, but less commonly than Scots pines. Affected trees turn brown suddenly, either over the entire tree or beginning on a few branches.

Pine wilt is caused by the pinewood nematode, a microscopic worm. The nematode lives in the water-conducting vessels of the pine tree, clogging them and causing wilting. It spreads from tree to tree by pine sawyer beetles. Infected, dying trees are often attacked by secondary bark beetles, which leave small holes in the trunk and carry a fungus that causes blue staining of the wood, often visible as blue radial wedges when the trunk is cut in cross-section.

There is no cure for pine wilt. Infected trees should be removed to prevent spread of the nematode to neighboring pine trees. The best way to prevent this disease is to avoid planting Scots pine in Iowa. Pine wilt is thought to be native to the Midwest, and native pines have evolved some resistance to this disease. Scots pines are not native to the Midwest and have not evolved with the disease so they have no resistance to it.

Factors other than pine wilt can also cause browning of pine needles. Yellowing or browning of the inner needles during the fall is a normal part of the growth cycle of pines. Improper cultural practices, such as planting too deep or injuries to the trunk, may cause needle browning. Environmental conditions, such as drought or waterlogged soil, may have similar effects. Finally, browning may appear in the early spring if the tree did not have enough water in its storage reserves to last through the entire winter.

An accurate diagnosis is important for proper management. Pine samples can be sent to the Plant Disease Clinic to test for pine wilt. An appropriate sample is a cross-section of the trunk, about an inch in thickness, or a branch segment at least two inches in diameter, taken from near the trunk. Samples can be mailed to Plant Disease Clinic, 351 Bessey Hall, Ames IA 50011, or taken to your county extension office. There is a $10 fee per sample.

More information on pine wilt can be found in publication SUL 9, Pine Wilt. 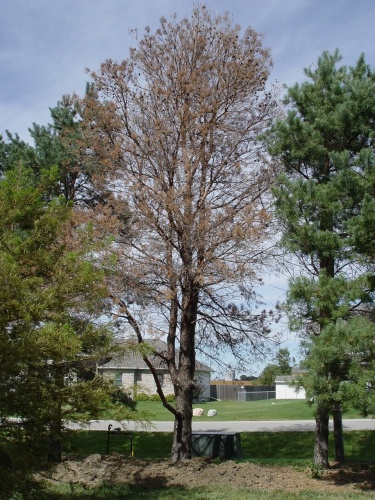 Links to this article are strongly encouraged, and this article may be republished without further permission if published as written and if credit is given to the author, Horticulture and Home Pest News, and Iowa State University Extension and Outreach. If this article is to be used in any other manner, permission from the author is required. This article was originally published on January 11, 2006. The information contained within may not be the most current and accurate depending on when it is accessed.