Stinkhorn fungi have been appearing in yards and fields recently. These curious-looking mushrooms do not cause disease problems. They simply live on dead organic matter, such as wood chips and crop debris.

A stinkhorn begins life as an egg-like object in the soil, about the size of a golf ball. As the fungus develops, a stalk appears topped with a slimy cap coated with a mass of olive-green to brown spores. There are several common stinkhorn fungi found in Iowa, and they range from about 4 to 8 inches in height.

Stinkhorns are appropriately named because they have a foul odor. The odor attracts insects that crawl over the stinkhorn, get covered in spores, and then fly away, which disperses the fungus. Stinkhorns are not poisonous, but are classified as inedible. Their stinky aroma alone would keep most people at a distance.

If you would like to learn more about common mushrooms in Iowa, pick up a copy of the bulletin Mushrooms and Other Related Fungi, available for $1.50 from Iowa State University Extension. Ask for NCR 129. 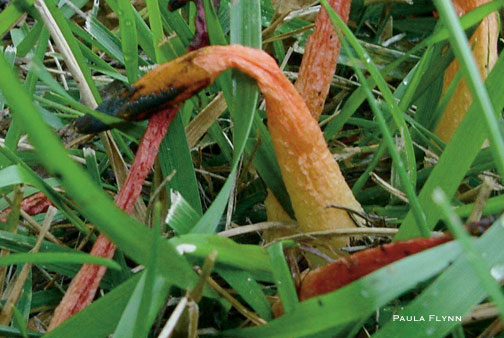 Links to this article are strongly encouraged, and this article may be republished without further permission if published as written and if credit is given to the author, Horticulture and Home Pest News, and Iowa State University Extension and Outreach. If this article is to be used in any other manner, permission from the author is required. This article was originally published on September 14, 2005. The information contained within may not be the most current and accurate depending on when it is accessed.