Hawthorns (Crataegus spp.) are susceptible to Cedar-Hawthorn Rust, Cedar-Quince Rust and Cedar-Apple Rust. Rusts are plant diseases caused by different species of fungi which often complete their life cycle on two host plants, in this case a cedar or a juniper, and a member of the rose family such as apple, crabapple, serviceberry, quince and hawthorn, among others. All three diseases are caused by different species of the fungus Gymnosporangium.

Cedar-Hawthorn Rust affects leaves of hawthorns. During rainy spring weather, the fungal spores are transferred from an infected cedar or juniper to the surface of the hawthorn leaves which, soon after the infection, show numerous small yellow spots. As they mature, the spots turn orange and produce minute dark dots in the center of the lesions. Later in the season, small white tube-like structures called aecia develop on the lower surface of the leaves. The aecia are spore producing structures. Severely affected leaves fall prematurely. Twigs, thorns and fruits are rarely affected by this type of rust.

Cedar-Quince Rust attacks fruits of hawthorns. After the fungal spores land on the fruits, they develop aecia, the small tube-like structures that produce spores. These give the affected fruits a spiky appearance, and later in the season, they turn color because they are covered by orange spores. Quince Rust also affects thorns and young twigs, producing swelling, canker and eventually death of the infected tissues. Leaves are not affected by this rust, which is considered the most damaging of the three.

Hawthorns are susceptible to Cedar-Apple Rust as well, although less frequently. In this case, the leaves are the most affected parts and show symptoms similar to those described for Cedar-Hawthorn Rust. Occasionally, fruits and twigs may show rust symptoms as well.

Usually, unless the hawthorn trees are under severe stress, these rusts do not cause severe damage.

To prevent the occurrence of these rust diseases, plant resistant varieties of both host plants, or plant susceptible hawthorn species in locations distant from cedars and junipers. If these evergreens are already part of the landscape, remove and destroy any galls from them, as well as any cankered areas from the hawthorn plants. (Galls are tumor-like growths on branches. When mature they swell and produce orange gelatinous finger-like structures where spores are formed.) Protective fungicides may also be applied to reduce infection. The application should be performed during mid-spring to protect the new leaves from the attack of spores from nearby junipers. Fungicide applications after the appearance of rust symptoms are ineffective. 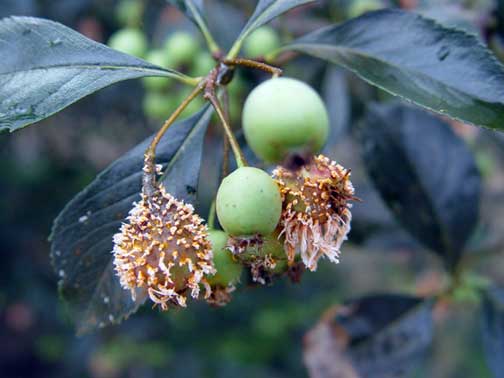 Links to this article are strongly encouraged, and this article may be republished without further permission if published as written and if credit is given to the author, Horticulture and Home Pest News, and Iowa State University Extension and Outreach. If this article is to be used in any other manner, permission from the author is required. This article was originally published on August 10, 2005. The information contained within may not be the most current and accurate depending on when it is accessed.