Wild Parsnip -- a Weed to Watch

by Kristine Schaefer, Department of Agronomy

Conditions have been especially favorable this year for wild parsnip, Pastinaca sativa, a common roadside weed in Iowa. Wild parsnip is a non-native plant in the parsnip family that originated in Europe. The edible roots were consumed in ancient Greece and Rome and there are still some cultivars grown for food today. Wild parsnip also poses a health hazard that many people may not be aware of.

Wild parsnip typically acts as a biennial, forming a rosette of basal leaves the first year, overwintering, and then flowering the second year. Occasionally, it may behave like a perennial, remaining in the basal rosette stage for more than one year. The basal rosette of wild parsnip consists of large, pinnately compound leaves that resemble celery leaves. Leaves that develop on the stem the second year (or subsequent growth season) are alternate, pinnately compound, and branched with serate or saw-toothed edges. Each leaf has 5 to 15 leaflets. The lower leaves have petioles (leaf stalks) while the upper leaves are sessile (no leaf stalks; attached directly to the stem). Upper leaves are progressively smaller than the lower leaves. The stem is hollow and grooved, 2 to 5 feet in height. The flowers are small, predominantly yellow (occasionally white), and 5-petaled, arranged in an umbel (resembles an upside down umbrella). The umbel ranges from 2 to 6 inches across and sits at the top of slender stems. The primary flowering period for wild parsnip in Iowa is from May through July. Wild parsnip reproduces by seed. In addition to the image below, more pictures of wild parsnip; are available from Virginia Tech.

Wild parsnip is found in open places such as roadsides, pastures, and disturbed areas. It tolerates a wide range of soil and environmental conditions, but prefers calcareous soils and sunny conditions. It can be found throughout most of the United States and Canada and produces a large amount of seed, which contributes to its persistence and spread. It is considered invasive in some areas and is on the noxious weed lists of several states.

Wild parsnip plant parts contain a substance called psoralen which can cause a condition known as "phytophotodermatitis". This reaction occurs when plant juice gets on the skin and then the skin is exposed to sunlight. The results are skin reddening, rash development and in severe cases, blisters, skin discoloration, and burning or scalding type pain. Wild parsnip burns often occur in elongated spots or streaks. Dark red or brownish skin discoloration develops where the burn or blisters first appeared and can last for several months, possibly up to two years. Extra care should be taken to wear protective clothing before working with or exposure to wild parsnip.

Cultural methods that favor the growth and development of desirable plant species over wild parsnip are a primary means to deter wild parsnip. Mechanical removal of flowers and seeds by hand-pulling or digging the root crown is an effective control method, although it can be quite labor intensive. The goal is to eliminate seed production. Since wild parsnip does not flower all at once, the area must be monitored for several weeks. Additional scouting and control practices, if necessary, should be done in subsequent years to prevent reestablishment. Chemical control options are available if mechanical methods are not feasible. Roundup (glyphosate) applied as a 2% solution can be spot sprayed on basal rosettes. It should be applied in early spring or late fall when most desirable vegetation is dormant since it is a nonselective herbicide (controls all vegetation). Another option is 2,4-D applied in early spring or late summer/fall. Avoid contacting other desirable plants with either herbicide. The area should be checked and monitored the following year. Additional herbicide applications or mechanical control measures may be necessary for the next couple of years to control newly germinating plants. 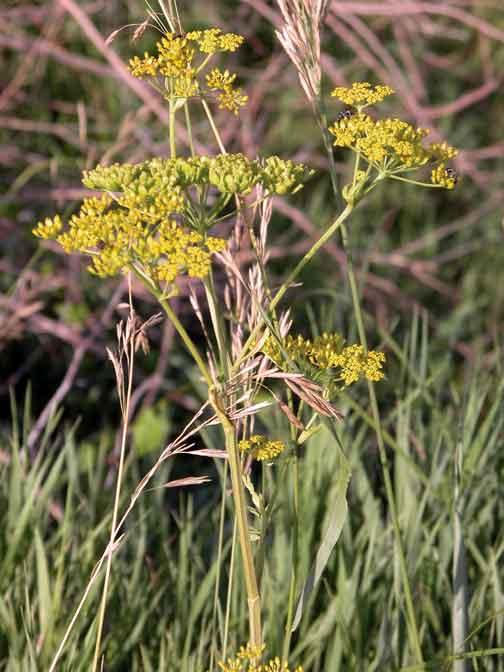 Links to this article are strongly encouraged, and this article may be republished without further permission if published as written and if credit is given to the author, Horticulture and Home Pest News, and Iowa State University Extension and Outreach. If this article is to be used in any other manner, permission from the author is required. This article was originally published on July 13, 2005. The information contained within may not be the most current and accurate depending on when it is accessed.