Banana is a popular fruit. It's easy to peel, easy to eat, and easy to find, typically located in a prominent spot in the produce section of a grocery store. With the wheels of the grocery cart still moving, we don't stop to think about the battles the banana grower had to fight to provide a perfect fruit for our convenient consumption.

Black Sigatoka is a leaf spot disease of banana that can cut a tree's fruit production in half. The fungal disease causes dark leaf spots that eventually enlarge and coalesce, causing much of the leaf area to turn yellow and brown. The high rainfall and humidity of the tropical regions in which bananas are grown are especially favorable for disease development. The fungus that causes black Sigatoka, Mycosphaerella fijiensis, is spread from tree to tree by wind, rain, and irrigation water. The name black Sigatoka was given to the disease because it was first discovered in 1963 in the Sigatoka Valley of Fiji.

Black Sigatoka is a difficult and expensive disease to control. It is estimated that 15-20% of the price of bananas is due to the cost of the disease control measures that are used to produce the fruit. Airplanes or helicopters are used to apply fungicides to leaves. Cultural practices such as removing diseased leaves and pruning branches to improve air circulation are also helpful in reducing the occurrence of the disease, but these practices are labor intensive.

Because fungicides are used so frequently, growers are finding that the fungus is becoming resistant to the fungicide products applied to the crop. In addition, many of the farmers that operate small plantations cannot afford to purchase fungicides. A convenient and low-cost way to control the disease would be to grow banana varieties that are resistant to the disease, but the most popular banana cultivars grown are extremely susceptible to black Sigatoka. Fortunately, banana hybrids that show resistance to this disease are being developed. More work still needs to be done to identify hybrids that produce fruit with a good shelf life and that are acceptable in taste to the consumer.

The next time a bright banana is grabbed from the countertop, remember that it took a diligent effort to provide it to you. 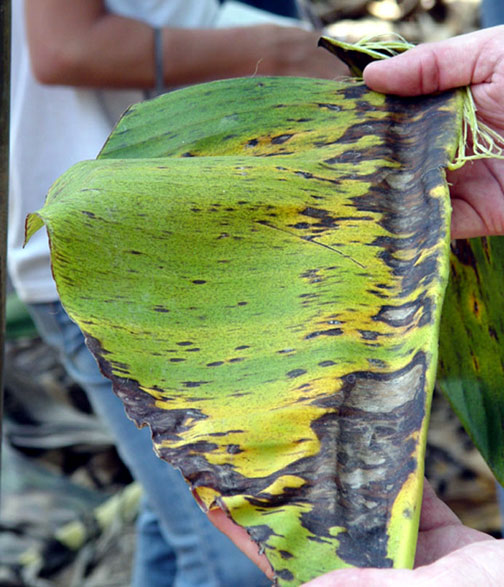 Browning and yellowing of a banana leaf caused by the fungal disease, black Sigatoka. (Image taken in Costa Rica .)

Links to this article are strongly encouraged, and this article may be republished without further permission if published as written and if credit is given to the author, Horticulture and Home Pest News, and Iowa State University Extension and Outreach. If this article is to be used in any other manner, permission from the author is required. This article was originally published on March 23, 2005. The information contained within may not be the most current and accurate depending on when it is accessed.