Why Did the Caterpillar Cross the Road?

by Laura Jesse, Department of Entomology

As you drive down country roads in the fall, you are probably noticing many caterpillars crossing the road. These are woolly bear caterpillars and there are 8 or more species in the U.S. Woolly bears are the caterpillar stage of medium sized moths known as tiger moths.

The best-known woolly bear is called the banded woolly bear. It is black at both ends and reddish-brown in the middle. The adult is called the Isabella moth. The banded woolly bear is found throughout the U.S., Mexico, and southern Canada but not the rest of the world. There are 2 generations of caterpillars each year (May and August). The second generation is the one noticed in late fall when the woolly bears are crossing the roads, usually in great haste as if they have someplace special to go. In fact, they are only scurrying to find a sheltered location under dead plant debris, etc., where they will spend the winter as a larva. In the spring, they will feed briefly before changing into a cocoon and eventually a moth. Eggs laid by the female moths start the cycle over again.

The adult moth of the banded woolly bear has white wings with scattered black spots. Wingspan is about 2 inches.

The banded woolly bear is the species mentioned in winter-prediction folklore, which claims the longer the black at the ends of the body, the more severe will be the coming winter. As you might expect, science has debunked this legend by showing the amount of black varies with the age of the caterpillar and the moisture levels in the area where it developed.

This doesn't stop the good folks of Vermilion, Ohio (west of Cleveland) from holding an annual Woolly Bear Festival — claimed to be the largest one-day festival in Ohio. Festivities include a parade, woolly bear races and an “official” analysis of the woolly bears and forecast for the coming winter. 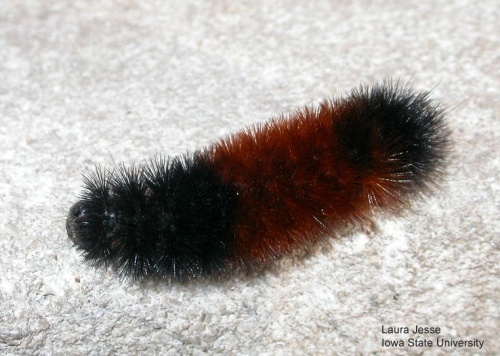 Banded woolly bear caterpillar, the larva of the Isabella moth.

Links to this article are strongly encouraged, and this article may be republished without further permission if published as written and if credit is given to the author, Horticulture and Home Pest News, and Iowa State University Extension and Outreach. If this article is to be used in any other manner, permission from the author is required. This article was originally published on November 9, 2005. The information contained within may not be the most current and accurate depending on when it is accessed.