Powdery Mildew on Trees and Ornamentals 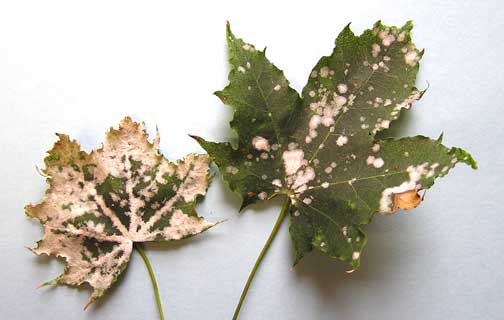 Powdery mildew is one of the easiest plant diseases to diagnose. This fungal disease appears as a white, dusty growth on the leaves and stems, often with tiny black dots. Nearly all plants can get powdery mildew, but it is especially common on lilac, phlox, turf, and zinnia.

Powdery mildew is most common when humidity is high and nights are cool while days are warm. It is especially common in the shade. It can be somewhat reduced by promoting airflow among plants by proper spacing and pruning and by planting susceptible species in the sun. Resistant varieties of several plants, such as zinnia and phlox, are available and should be used when possible. Fungicide sprays can be used preventatively if desired.

On large trees such as maple and oak, powdery mildew typically appears late in the season. Because of this, the disease does not cause significant harm to the plant, as the leaves are almost done their job of making food for the year and will drop soon. No management is typically recommended in this instance.

Links to this article are strongly encouraged, and this article may be republished without further permission if published as written and if credit is given to the author, Horticulture and Home Pest News, and Iowa State University Extension and Outreach. If this article is to be used in any other manner, permission from the author is required. This article was originally published on October 5, 2005. The information contained within may not be the most current and accurate depending on when it is accessed.