A first step in diagnosing a plant problem is to know the identity of the plant species and what a healthy plant should look like. The characteristics of some plants change at different times of the year or as they age. Other plants produce structures or foliage color that is unusual, sometimes leading to a concern that the plants are diseased or infested by insects.

Once a feel is developed for what is normal, plants can be scouted for unusual appearances, which are symptoms of a problem. Developing good observation skills can help you catch problems early, before they are spread to nearby plants.

Knowledge of the plant species can also help narrow the list of possible disease or insect problems. Many pathogens are host specific, meaning that they attack a certain groups of plants. A review of the reported problems for a particular plant is a helpful step in the diagnostic process.

The Plant Disease Clinic has received samples that were not diseased, but healthy. For example, many conifer samples are submitted in the fall that show seasonal needle loss. It's normal for conifers to drop their innermost needles in the fall. Some conifers, such as bald cypress and larch trees, drop all of their needles. Seasonal needle loss can be alarming if the normal characteristics are not understood. Other healthy samples that have been submitted to the Plant Disease Clinic include: a gall on a magnolia (was actually a fruit on the tree), a Russian olive root with galls (were normal nitrogen-fixing nodules), a sycamore leaf with a white substance thought to be powdery mildew (was natural pubescence or leaf hairs), and ferns with brown spots on the leaf undersides (were normal reproductive structures).

Fortunately, the control measure for these "problems" is easy and inexpensive. Do nothing! 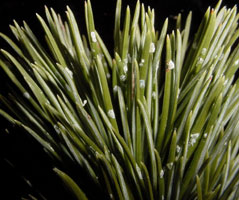 Pinus aristata. The needles on this bristlecone pine show spots of white resin, a normal occurrence that is sometimes mistakenly diagnosed as a scale infestation. 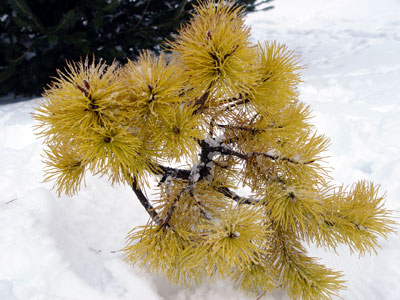 Pinus contorta var. latifolia 'Chief Joseph'. The golden-yellow, twisted needles on this lodgepole pine are normal for this species, and are especially noticeable in the winter months. 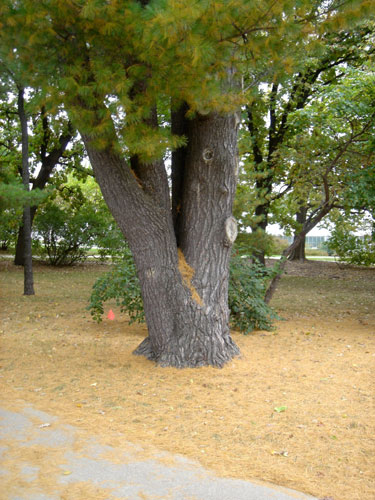 Pinus strobus. The normal needle drop on white pines is especially noticeable in the fall and can cause concern because the inner needles turn bright yellow and then drop.

Links to this article are strongly encouraged, and this article may be republished without further permission if published as written and if credit is given to the author, Horticulture and Home Pest News, and Iowa State University Extension and Outreach. If this article is to be used in any other manner, permission from the author is required. This article was originally published on January 14, 2005. The information contained within may not be the most current and accurate depending on when it is accessed.