Several eastern Iowa counties have reported that Japanese beetle adults are out and about now. That means the rest of the state should be watching for this relatively new pest and send specimens from counties not yet marked on the accompanying map.

Adult beetles are present from mid-June through July. They are similar to Junebugs in general appearance but are only 3/8 inch long and 1/4 inch wide. The head and thorax are shiny metallic green, and the wing covers are coppery red. A distinguishing feature is a row of five white hair tufts on each side of the abdomen.

Avoidance. Removing beetles by hand is one option for control when only a few beetles are present on smaller landscape plants. Remove beetles when they first appear to avoid plant injury that attracts more beetles. Beetles are sluggish easily in the morning and can be easily shaken from small plants into a bucket of soapy water. Screens and barriers such as cheesecloth or floating row cover cloth can be put over high value plants such as roses and fruit for protection during peak beetle activity (late June to mid-July).

Traps. Several traps specific to JB have been developed to capture adults. Unfortunately, recent data indicate that these traps do not significantly reduce grub populations and in some cases may actually contribute to increased plant defoliation by beetles. Traps appear to attract more beetles than they capture.

Insecticides. Nearly all urban, contact insecticides are labeled for JB adult control. Common choices on ornamental plants include Sevin, permethrin, malathion, Orthene, and rotenone. Insecticides must be carefully chosen to match the product to the treatment site (trees, flowers, vegetables, fruits, etc.). Repeated applications may be necessary because of the relatively short residual effect of the products and rainfall. Observe waiting days from last application to harvest when treating a food crop. Do not spray plants in bloom; alternatively treat in the late afternoon after honey bees have left for the day. 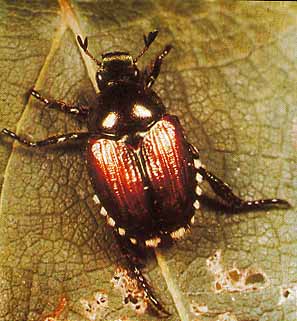 Links to this article are strongly encouraged, and this article may be republished without further permission if published as written and if credit is given to the author, Horticulture and Home Pest News, and Iowa State University Extension and Outreach. If this article is to be used in any other manner, permission from the author is required. This article was originally published on July 13, 2001. The information contained within may not be the most current and accurate depending on when it is accessed.